The Shocking Truth of a Life Without Retirement Savings

According to the latest studies, nearly 40 million American households have no retirement savings at all. Nope, not a dime saved for retirement. Among those who have retirement savings, the median balance was a mere $59,000; surely not enough to last for the longer lives that many Americans are living today.

And Social Security, while it may help, isn’t going to fund most people’s entire living expenses in retirement. The average Social Security check payout in the year 2016 was only $1,341 per month.

What is Life in Retirement Like for Those Who Didn’t Save Enough? 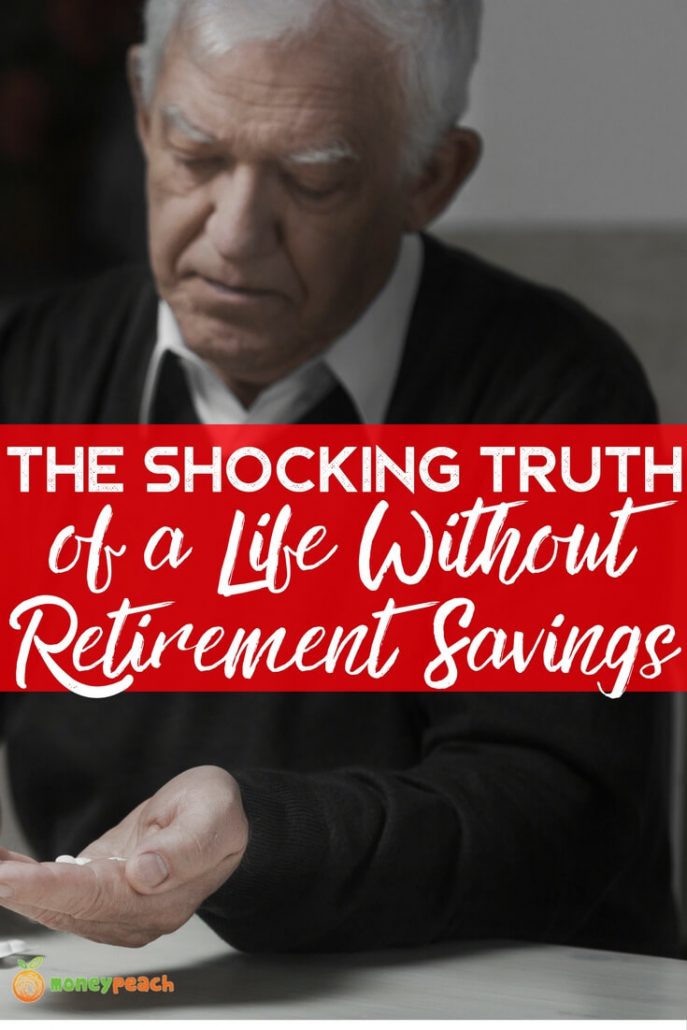 What does life hold for those who haven’t saved enough for retirement? On a recent Money Peach Podcast episode, guest speaker Chris Hogan shares the heart-wrenching story of Michael; a young man visiting his sweet aunt only to discover she had been (literally) living on dog food as that was all she could afford to eat.

The story brought a catalyst of change for Michael and his wife, partly because they had a financial picture themselves which included little savings, massive debt, and no cash reserves to help out Michael’s beloved aunt.

I can relate to Michael’s story within my own personal life.

John, a very close relative, had been living with Type 2 Diabetes when he accidentally cut his toe. Since one of the effects of Type 2 Diabetes is it inhibits the body’s ability to heal, the cut took a turn for the worse despite care measures, and the doctor ordered immediate amputation of John’s toe.

The weeklong hospital stay for this procedure was covered by the government since John is a veteran. However, the problem was John had no retirement savings and couldn’t afford to be off of work for a week.

He ended up insisting the doctors release him early so he could get back to doing his work as a handyman. Three days after having his toe removed, John, who is in his 70’s, was out repairing and remodeling homes – not because he wanted to, but because he had no other choice.

Saving Enough: Take the Steps You Can, While You Can

Don’t wait until you are in a position like John’s or like Michael’s aunt to start worrying about your level of retirement savings. Take the necessary steps to increase retirement savings now – while you still have the physical and mental capabilities to do so.

Do you know how much you need to have in retirement savings so that you can avoid living life with scenarios like the ones mentioned above?

The first place to start is by finding out how much you need to have saved for retirement using a retirement calculator like Chris Hogan’s RIQ.

From there, you need to create a budget cash-flow plan to identify exactly what you need to save each month and where you will be saving from  in order to reach your retirement goals. The Money Peach Budget Tools page can help you with that.

Saving enough for a healthy retirement may require a few tough decisions, but I promise they will not kill you.

For example, you may be have to cancel your cable TV subscription, downgrade the type of car you drive, or avoid spending too much time inside restaurants.

When Chris and his wife paid off $52,000 in consumer debt in just seven months they had to make some of those tough decisions. They sold everything (including both of their newer cars), picked up extra jobs, and lived on “scorched earth lifestyle” to regain control of their life and money.

Today they are now on the path of building substantial wealth and they will both tell you their short term sacrifice was worth the long term gain.

Start investing in or increasing your contributions to your employer’s 401(k) plan and take advantage of the company match if your employer offers one.

I am a huge fan of investing platforms such as Betterment, which allow you to open up an IRA account quickly while paying extremely low fees.

Saving for retirement is of the utmost importance, but the fact of the matter is you don’t have to wait until you’re sixty-five to retire. Retirement isn’t an age – it’s a number, and if you have enough money saved you can retire at any age.

After you’ve figured out how much you need to retire using the steps above, re-do the calculations with an earlier retirement age.

Then open a non-retirement investment account with a firm such as Betterment which will help you start investing in funds that you can use even before you’ve reached retirement age.