Skip to content
Want to Create a Budget, Save More Money, and Pay Off Debt Quicker?
Learn More

Emily’s financial situation started off like most others in their early 20s but it didn’t turn out quite like she expected.

In 2014, Emily of Syracuse NY, graduated with her MBA in finance, met the man of her dreams and they married soon afterwards. Not only were they just starting their new life together, Emily had also added on multiple side jobs to her full-time career in order to pay down her student loan debt as quickly as possible.

“I remember my parents instilled in me that debt was not an option. If you had the money to pay it off, that’s exactly what you did. If you didn’t have the money, you figured out a way to get it as quickly as possible and then you paid it off”.

As Emily was grinding away- working 60 to 70 hours per week, she had assumed her finances were all in order. That was until she received her first phone call from a debt collector.

“At first I thought there must be some mistake. They were talking about credit cards I had maxed out which I didn’t even sign up for and then would tell me information about my identity that only I would know...or at least only my husband and I would know about.”

Soon afterwards she would learn that while she was working those 60 to 70 hours per week, her husband had been let go from his job and he never told her about it. To make things worse, he opened up credit cards in her name and maxed them out over the course of a few months. Not only was she now facing a huge problem inside her marriage, she was also the victim of identity theft.

The Truth About Her Credit Score

One of the first things she decided to do was to determine how bad her credit had been damaged and how much her husband had added onto her credit report. She didn’t quite know what to expect since she’d always been the responsible one with her finances and feared the worst.

However her fears would soon become reality…

Through a recommendation from a friend, Emily learned of a free website called Credit Sesame where she could get instant access to her credit score and credit report to see exactly what was going on with her finances. Within a few minutes of answering three questions to prove she was in fact Emily, her score was revealed.

She had plummeted her credit score all the way down to a dismal 525 – a rating of “bad credit” in the credit world.

Unfortunately for her, things were worse than she had anticipated. Not only did her score drop dramatically, but she would also learn her husband had taken out multiple credit cards in her name over past few months and had maxed those out as well.

Picking Up the Pieces

What do you do when you find out your husband has been lying to you, you now have a bad credit score, there is a bunch of debt you’re going to have to pay back you never agreed to, and you are already working 60 to 70 hours per week?

In addition to what was going on her personal life, she also knew she needed a better credit score in her professional life inside the financial industry.

“I needed my credit to go up and I needed to take control of my finances. If I can’t manage my own finances, how can I positively impact someone else’s?”

For Emily, figuring out what to do first seemed overwhelming. The world of credit scores and credit repair can lead you into panic and confusion on what to do next, and many times you will get ten different answers from five different financial professionals on what that next step is.

Luckily for Emily, unexpected help was on the way.

When she first grabbed her free score from Credit Sesame, she thought it would end there. However, she was shocked when she began receiving education on what was causing her score to be so low (besides the obvious) and additional alerts on how she could bring her score back up.

“When I went to Credit Sesame, I originally thought I was just getting a free credit score and report. However, since then they have continued to help me by showing me ways to gradually raise my score and what things to stay away from. Also, every time my score does goes up, they send me a thataboy, which as strange as it sounds has been a huge help.” 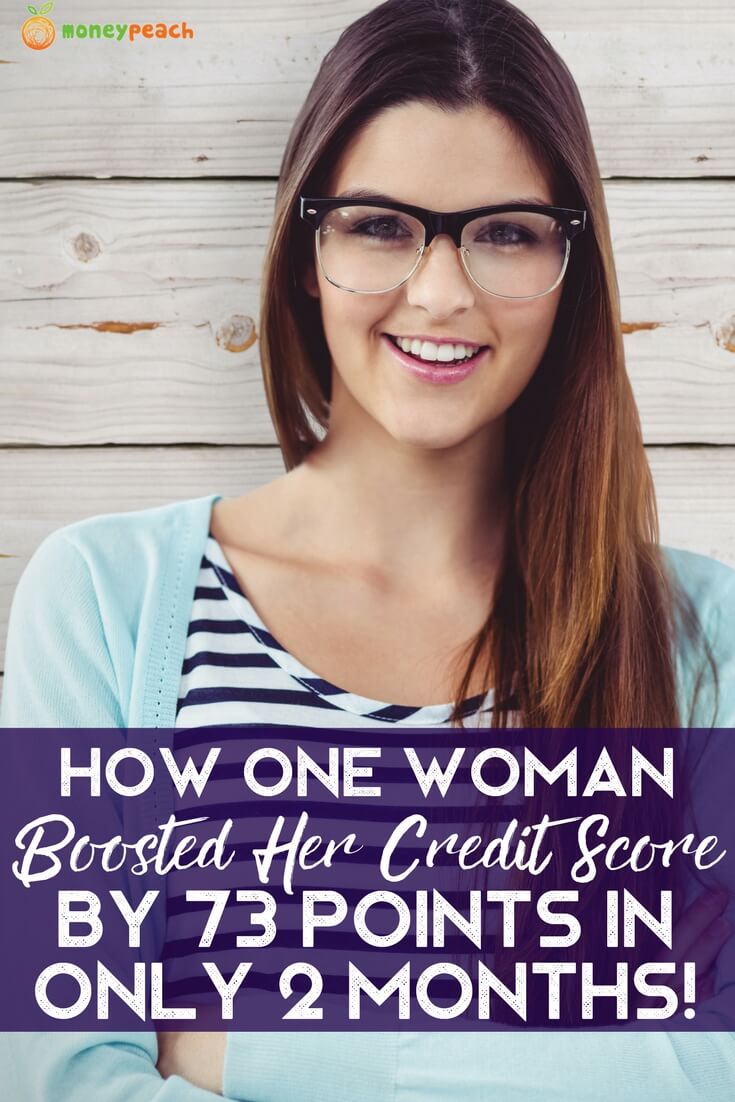 How She Raised Her Credit Score

In order to take back control of her life and money, Emily looked at her finances in two different lights: her credit score and her debt.

The first thing she planned on was attacking her debt snowball, which is a method of paying down debt as quickly as possible while focusing on the interest rates for the order in which debt is rapidly paid off.

“I’m working on my debt snowball right now, which will have a large positive impact on my credit utilization and therefore cause my credit score to go up.”

With a credit score of 525, there is a very low probability she would be approved for an increase in credit limit, therefore the only way she will lower her credit utilization is to pay down her debt to the 5% -7% of the amount of available credit.

Once she starts moving in the right direction, not only will her score go up, but she will have a higher likelihood of earning an increased credit limit to further lower her credit utilization ratio.

After she was shown the credit utilization method, she was then introduced to the credit cards she could open where she had a very high probability of approval and which ones would offer her the greatest rewards at the lowest cost.

In combination with managing her debt, lowering her credit utilization, and opening a recommended credit card, Emily has steadily seen her score move in the positive direction while also feeling the win from paying off debt.

Not only is Emily focused on bringing her score up to par, she is also thinking of her long-term financial situation.

Through Facebook, she happened to come across a post for our free online workshop, How to Stop Living Paycheck to Paycheck….and Just Live.

After taking what she learned from inside the workshop and then enrolling in our 9-week online coaching program, Emily is on her way to living on a real financial plan and becoming even more intentional about paying down her debt and taking back her life and money.

“It took working 3 jobs and eating freezer burnt leftovers, but I can check off my $1,000 emergency fund from my to do list! Making these changes also meant that I had to stop listening to some people I love dearly in order to accomplish my goals.

BUT…What a huge relief. If you’re reaching for a goal that seems a little out of your abilities, just keep reaching. If your social circle gets a little smaller in the process, that’s okay too…now you have all of us!”

Within the first three weeks of grabbing her free credit score from Credit Sesame, Emily’s score immediately went up 30 points. Fast forward just two months later and her score has gone from 525 up to 598!

Not only has her score gone back up. But, all other areas of her finances are on the up and up as well. In addition to building her emergency fund, she has also paid off one debt. Plus, she has only three payments left on her auto loan.

With the help of Credit Sesame to help her manager her credit and what she is implementing from inside our coaching program, the days of her financial struggles are coming to an end.

As for her marriage, she decided to call it quits and move on.

“I needed to get away from the toxic environment and move on. I’m also still waiting to find out which debts I will be responsible once the divorce is finalized. This pushes pause on paying down any more of his debt.

In the meantime, I moved back in with my parents to save as much money as possible while waiting on our divorce to go through. Although I never imagined I would be put in this situation, I am fortunate to have the right tools and resources to help you through.”

*The names of the actual people involved is this story were changed.

10 Money FAQs You Should Be Able to Answer