One of the biggest financial myths in the Universe is ZERO PERCENT INTEREST. We are marketed to everyday with the idea that the store would like to loan us money for free if we would simply buy something. We (myself included) have fallen so madly in love with the idea of zero percent interest, we even make sense of our wise money decisions with statements like this:

“Yeah, I pretty much had to buy it because it was 0% interest”

We all know about the car dealerships, furniture stores, and appliance warehouses offering these amazing 0% interest deals. My wife always says “Ah-maze-balls” when something is beyond awesome. However, this my friends is not one of those amazing-balls financial awesome thingies. It is simply crap. Sorry.

This is how it 0% really works:

I don’t want to pick on any one store, so let’s make one up. You are driving past “Rooms-R-Us” and see a giant sign: 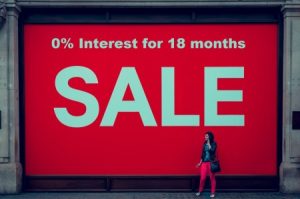 Before you ever started reading this blog (thank-you by the way) you would have turned the car around and pulled right underneath that giant sign. You probably also stared down the sign prior to walking in and declared victory!

You were going to stick it to this store so bad, they wouldn’t know what happened. “Rooms-R-Us” is going to have to place you on the Do Not Do Business w/ This Guy List because you are the one person who has them figured out. Please be honest and tell me I was not the only one under this illusion.

I walk in the store and POW – there is another giant sign letting me know there is still 0% interest. Next to the sign someone has conveniently hung a giant arrow pointing to the couch that would comfortably seat a Ford Truck. This is where I even think to myself, this poor store wished they never let me in.

I walk over to the couch I never even wanted in the first place, and immediately the friendly salesman jumps out and his teeth are Ah-Maze-Balls. Straight, white, and pure awesome with a smile that says Just go ahead and get your wallet out.

About 10 minutes later, I am walking out of the store the brand new owner of the mega-couch. I am also still under the illusion I just got a deal. In fact, I know I got a deal.

WRONG…… Let’s back the story up just a tad to see what the crap happened to my deal.

Before I walked in and before the sign was ever up, there was a deal being made between Rooms-R-Us and the bank. Rooms-R-Us needs a bank for the financing. This is why if you have ever financed something from a store, you often make payments to a bank rather than the store you bought the item from.

Rooms-R-Us and the bank come up with a brilliant plan. Rooms-R-Us knows they can make a profit on the couch if they sell it for $300 over what they paid. For easy numbers, let’s say they obtained the couch at the wholesale price of $1,800. Therefore, they are going to sell the couch for $2,100 and make roughly $300 profit.

However, they would like to offer 0% interest to attract customers, so they ask the bank to help them out.

Ask yourself this question: If I were a bank, why would I want to lend money to Rooms-R-Us at 0% interest? The simple answer: You wouldn’t and neither do the banks.

“0% interest for the first 18 months. If there is one late payment or the balance is not paid in full within 18 months, you will be charged the original loan amount of $2,400 at a lovely 24% interest. Sign below”

Rooms-R-Us is happy because they know the zero percent tactic will get you in their store. The banks are even happier because not only do they get an instant kick back for every sale, they also get to charge back interest at an alarming high rate for every one of us who says they will pay it off in time – and then we don’t. I am sure you can think of someone who has been there. Maybe that someone is even in your mirror.

There you Have It

Now you know and you can prepare for the next time you see the giant sign on the side of the road. You have now been deputized with the zero percent interest knowledge! However, I don’t want to leave you there, I want to take you to the next level. This level is what I refer to as: Ah-Maze-Zing percent financing.

So, you were just about to sign up for the 0% interest on $2,400 and make 18 payments of $134. You were completely comfortable to sign up for this lovely payment earlier, but let’s switch it around and do something crazy. Let’s put Ah-Maze-Zing percent financing into action.

Let’s delay the instant pleasure of buying stuff NOW because I WANT IT AND I WANT IT NOW! Instead, let’s open a sinking fund and put in $134/month for 14 months.

Let Me Ask You This:

What if you walk into Rooms-R-Us with a briefcase full of $5s, $10s, and $20s which adds up to $1,876? You start talking to the salesman and right about the time you go over the price, you pop open both latches on the briefcase at the same time in the “Hey, look at me – I’m awesome” way?

The answer is you will, or you will buy from somewhere else that accepts cash (hint: everywhere).

Don’t beat yourself up if you have fallen into the 0% interest game before. We were once professional 0% buyers of everything. We 0%-ed ourselves to death for a car, a washer machine, dryer, and of course – a Plasma TV Baby! The most embarrassing part: I always assumed I was getting a deal. I didn’t get a deal, but instead got an education from the school of making payments for life. Don’t let this be you too.

Next time you walk into a store that is offering 0% interest, you should be licking your chops and salivating at the chance of getting a REAL deal. Go buy a used (but functional) briefcase at a garage sale and stuff money in there.

Make it look like you are getting ready to party with Jay-Z when you pop open those latches. Watch your opponent start getting nervous and give you that deal you just earned by being money smart. Don’t worry about him, there is someone pulling up right now ready to sign up for 0% payments – aren’t you glad it’s no longer you?

I am here to help, to provide massive value, and most importantly, I am not going anywhere.

I want you to win with money and I want you to take a piece of information from this website and implement in a way that makes sense for you.

The absolute best way to tell me I am helping you is by leaving me a comment below and sharing this on your social media by clicking on any of the icons above.

This money stuff isn’t taught anywhere and it needs to be on the minds of people just like you. What would the world be like if we didn’t have debt payments each month? How would people feel if they no longer had the stress about money? How much more fun could we have if money was no longer the #1 problem in life?

Someone out there needs to see this. It’s helpful, it’s needed, and most importantly – you get to help get the word out.

Thanks for your loyal support,