I Challenged Myself to a No-Spend Weekend: Here’s What I Learned

I’m usually the type who’s always looking to save a buck but every so often, my frugal habits fall to the wayside. This tends to happen more during summer, when day trips to the beach and out-of-town visitors are the norm.

I’m now in Chicago, dog-sitting for a friend who’s out of the country (freelance life perks!), which has made it even more challenging to keep my spending in check. Since I’m only here a little while before I return to L.A., I’ve found it easier to justify my splurges because, well, when else will I get to check out a lakefront restaurant or go on an impromptu road trip to Madison?

So, to get my budget back on track, I gave myself the ultimate challenge: a weekend spending fast. I’d be social, but I wouldn’t spend a single new dollar.

To avoid spending money on food (my biggest expense), I prepped by buying about $40 worth of groceries and planned snacks and meals beforehand. Here’s how the weekend went.

I resolved to find free activities, which, fortunately, there’s no shortage of in Chicago. I downloaded the My Chi Parks App, which lists free movies, concerts and community activities, and scoured sites like The Visualistfor opening night receptions at art galleries.

Using my prepaid transit pass, I took the train to the Pokémon Go Fest in Grant Park. Knowing I’d be tempted to buy food, I packed some nuts and filled up my water bottle.

That night, I attended a festival after-party, complete with a giant dancing Pikachu and free games, at a barcade. I had a great time and made some new friends, who offered to buy me a drink when I told them about my no-spend experiment. I politely passed (that’d be cheating, right?) and ordered water instead. My train home was delayed and I was really tempted to call a Lyft—but ultimately I waited it out and held onto my money. (Day 1: Success!)

Sunday morning, I went to a show at a cozy art space down the street, then passed through the Logan Square farmer’s market. Yes, I was one of those people who shamelessly tried the free samples and did not buy a single thing.

Later, I used a movie pass I’ve had folded in my wallet for a year. On my bike ride to the theatre, I spotted a Jet.com brand ambassador giving out free ice cream. Score. After the movie, I was feeling pretty peckish, so I hit up Target to buy snacks with a partially unused gift card (hey, it wasn’t new cash).

That night, my roommate Greg invited me out for dinner. I told him I wasn’t spending money, but he encouraged me to come anyway. We sat outside at a casual restaurant, where the waiter didn’t seem to mind that I was just drinking water. Greg’s meal came with hot tea, which he urged me to take—plus some fries. I don’t like to be a mooch, but he insisted they’d otherwise go to waste. (How often have you over-ordered and left a half-plate of uneaten fries?)

Verdict: I did tap the old gift card, but I didn’t spend any new cash. Success! 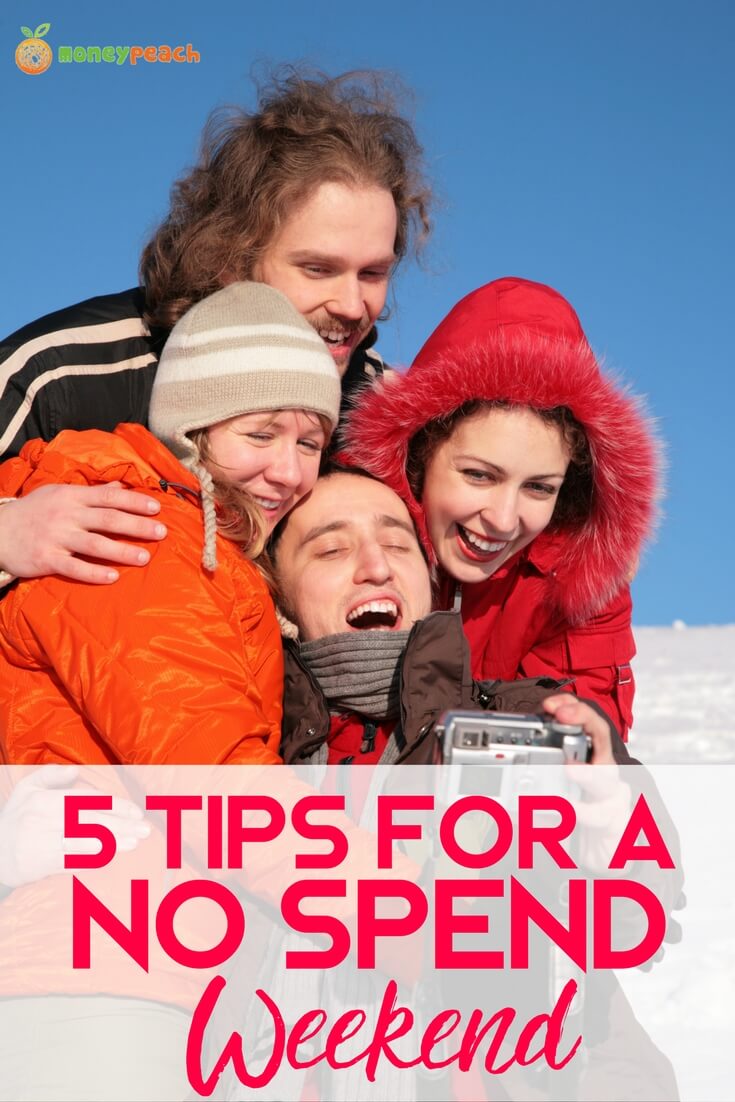 I didn’t spend a single dollar, but there were plenty of times I was tempted. If I do it again, here’s how I’d prep to make sure I stick to it and avoid uncomfortable situations.

Do it during the week. The hardest part was the idea of missing out on social time with my friends. If that’s your hangup, ease in with a no-spend Tuesday or Wednesday. Not only are you less likely to have to decline something fun, but your weekday routine is probably easier to plan around.

Get your friends’ buy-in. Either way, tell your friends ahead of time what you’re doing—and that you won’t be able to partake in certain outings (especially ones at restaurants). Even better? Invite them to join you for a free activity instead.

Use your freebies. Whether it’s gift cards, free passes or something else that’s prepaid, look for ways to cash in “old money.” Like I did with the movie passes. It’s easy to forget about them when you’re used to reaching for your cash or credit card instead.

Give yourself choices. A spending freeze can feel pretty limiting, so give yourself as many choices as possible. Since food spending is my weakness, I made sure I had several different snack and meal options I could make with my groceries, which kept me from feeling bored and more likely to buy food out.

Make it a game. There were definitely moments when it was hard not to spend, but this exercise taught me that often, I spent not out of necessity, but impulse or habit. And because this turned into a mission of sorts, it was actually kind of fun.

101 Ways to Save More Money Now

Shop Here These Weekends and Skip the Sales Tax