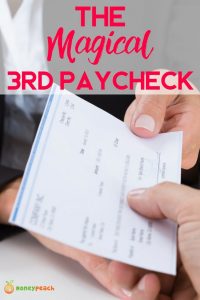 Is it another one of those 3 paycheck months again?

If you get a paycheck every two weeks and on the same day, and you are approaching a 3 paycheck month, I want you to pay close attention here.

I just found you a bunch of money!

One of the things we show you inside Awesome Money Course, is to not just identify how you get paid, but how often you get paid.

This is extremely important, because how you get paid throughout the year has a massive effect on your savings, paying off debt, and building wealth.

Let me break it down for you.

Why a 3 Paycheck Month?

Let’s say a check comes in every two weeks on Friday. If this is your situation, then you are on a bi-weekly payment schedule. Therefore, each month you are expecting two steady paychecks.

However, this isn’t exactly how it works, and believe it or not it works in your favor.

If you break it down, there are 12 months in a year, and since you receive a check every two weeks, you will receive a total of 24 checks, right?

You actually get a total of 26 checks every year because of the way the calendar works, there are two months every year where you are paid out three times.

“No Crap Peach, everyone knows there are 52 weeks in a year.”

I know I am stating the obvious here, but follow me a little bit further for the juicy stuff below…

What Does this Mean for Me?

However, twice a year those magical months appear and a third paycheck magically appears into your checking account! Since your budget works with just each month, then what to do about this third check, right?

What Do I Do First?

I want you to look at the calendar and figure out which two months are going to have that third payday. It won’t be the same each year, so prepare accordingly.

Then, I want you to only take half of that third paycheck when it comes in, and then the other half the following paycheck the next month.

Why Only Half at a Time?

When doing a monthly budget, all you are doing is identifying how much money comes in each month (income) and assigning every dollar a place to be spent (expense). It’s no more than 5th grade math.

However, your monthly expenses aren’t paid out evenly throughout the month. In fact, there will usually be a 7 -10 day period inside each month where a majority of your money is spent in the form of your larger bills.

The rent, mortgage, car payments, and other larger monthly expenses often end up at the last few days or the first few days of each month. Ironically, this is also around the time your third paycheck arrives.

This is the reason why I only want you to take half of that third paycheck now, and the other half in two weeks. I don’t want you to go without any income for a full four weeks and end up in what I refer to as paycheck shock.

The reason I know is because we have experienced it and it will throw you into a little bit of a two week panic. No Bueno.

What Should I Do with My Third Paycheck?

This is the fun part because now you get to decide what to do with your little magical bonus. One of the main things I tell my Awesome Money Course Students is:

You go to work, you make the money, therefore you decide what to do with the money.

If I am in your shoes, I would first build up my starter emergency fund of $1k – $2k and then I would throw the rest of it at debt.

However, if I was also anticipating a large unavoidable expense coming up (new tires, annual payment of some sort, or a family member’s wedding on the other side of the world) then I would apply it in those areas of your life to keep from going into further debt.

A great place to park this money is inside a Sinking Fund.

Related: What is a Sinking Fund?

What Should I Definitely NOT Do?

For most people, your third paycheck will actually be larger than the first two. This is because your health insurance premiums are usually only taken out 24 times a year, leaving you with a little boost in that third paycheck.

However, one of the dumbest things I see people do is change their W-4 tax withholdings for their third paycheck to get an even larger boost for that pay period.

This is dumb and I don’t recommend it.

One thing about the IRS is they are getting their money no matter how crafty you think you are. If you change your withholding from single and zero dependents to married and ten dependents so you can boost your miracle third check , you’re not tricking the IRS at all.

In fact, all you are doing is setting yourself up to owe the IRS more next spring. What is even worse, is when you forget about changing your W-4 back to normal. Then you end up owing the IRS thousands of dollars on their payment plan at an incredibly high interest rate. This is stupid and absolutely not necessary at all for you to be successful with your money.

The bottom line is do NOT do this. There is no benefit to it and all you are doing is setting yourself up for too many things to go wrong. You aren’t going to trick the IRS. Period.

The first time Andrea and I looked at this idea, I remember thinking there must be some mistake. How was it possible that over the past decade, we had misplaced this extra money and had absolutely nothing to show for it? It made us both sick to our stomachs.

Since 2011, we have taken each and every 3rd paycheck and have done some incredible things with them:

I have said this over and over and I’ll say it again. The number one habit of highly successful people is they are proactive.

So, I want you to be proactive with your money. I want you to make the small changes inside your life now that will reward you ten times over down the road. I want you to actually have money, instead of constantly running on the financial treadmill of life and playing the game of paycheck to paycheck.

Look at the calendar and start marking off when that third paycheck is due to arrive. When it comes, let’s tell it what to do instead of wondering where the hell it went. You go to work., You make the money. Therefore, you get to tell your money what to do.